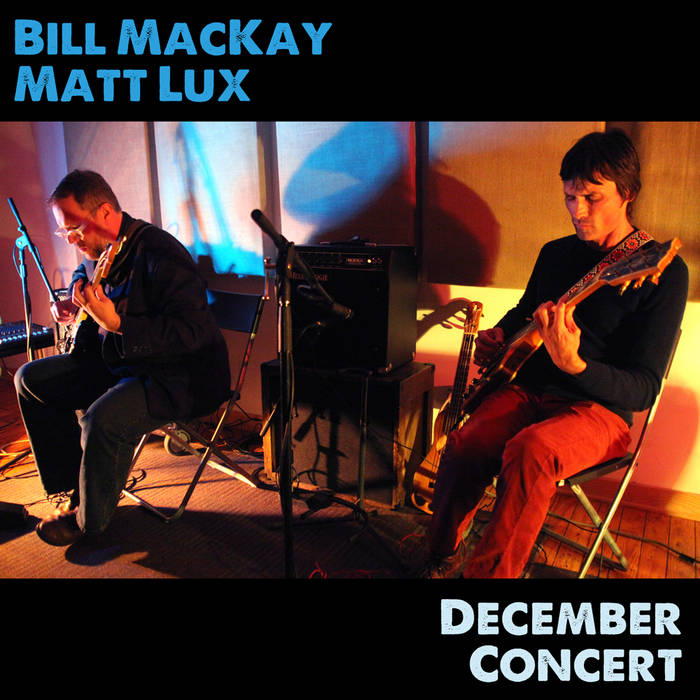 December Concert began as MacKay’s concert-project for the Experimental Sound Studio’s Oscillations series, centering on an exploration of compositions via stringed instruments: guitar, bass, and requinto. MacKay and Lux first performed together nearly 10 years ago at Chicago’s Heaven Gallery, and have sporadically appeared together since then, most recently in projects led by LeRoy Bach and Tobin Summerfield.

The compositions and improvisations that make up December Concert treat various themes that captivated MacKay at the time: the birth, dismantling and re-birth of tradition; the winter as a backdrop for searching and sacrifice; the power of the seasons in flux; and the expression of the psyche’s urges to hibernate yet also run wild.

Bill MacKay is a Chicago guitarist, composer and improviser who has worked extensively in folk, experimental rock, and improvised jazz. He works as a solo artist, with his group Darts & Arrows, and has maintained collaborations with cellist Katinka Kleijn, LeRoy Bach, Ben Boye and Charles Rumback among other musicians. He is also a writer, and a long-time student of French, Spanish and Portuguese. He remains intrigued not only by the connections between these studies and music making but also by the ever-evolving arc from the traditional to the avant-garde.

Matt Lux is a Chicago composer-bassist whose work has similarly claimed diverse styles and sounds while he has carved out his own unique voice. He is known for his work with Pharoah Sanders, Iron & Wine, Rob Mazurek’s Exploding Star Orchestra, and Isotope 217, and he works in ongoing projects with Marvin Tate, LeRoy Bach, and Dan Bitney from Tortoise.

Per Ardua Ad Astrum, Wheat & Scythe and Tourniquet for a Season by Bill MacKay & Matt Lux except Orbits Unknown and Black Leaves by Bill MacKay

Mastered by Peter Andreadis at All City Mastering

All rights reserved by the artists.

Bandcamp Daily  your guide to the world of Bandcamp